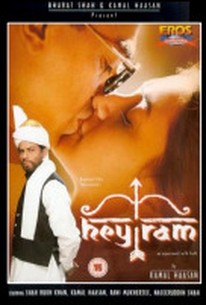 The life of Saket Ram, the man who nearly killed Mahatma Gandhi, is dramatized in this film that examines the tumultuous political and social history of India in the 1940s. In 1946, Ram (Kamal Haasan) was an archaeologist of the Hindu faith who believed the partition of Hindus and Muslims was ultimately destructive for both sides and regarded a Muslim, Amjad (Shah Rukh Khan), as one of his closest friends. But political turmoil resulted in the cancellation of a dig that employed both men, and Ram returned to his home in Calcutta. Subsequently, violence broke out between Muslims and Hindus in the city, and a gang of Muslin extremists invaded Ram's home, raping and murdering his wife Aparna (Rani Mukharjee). Ram was traumatized by this event and soon joined a radical Hindu group, hoping to avenge his wife's fate before he returned to rural India and the village where he was born. Ram consented to a marriage arranged by his parents, but he did not love his new spouse Mythili (Vasundra Das), and spent more and more time with the Hindu radicals, who in time choose him for a special assignment -- the assassination of Gandhi, whose unification efforts they had come to oppose. Containing sequences in both color and black-and-white, Hey! Ram moves back and forth between the late 1990s, as an ailing Ram recalls his life story, and the 1940s, where the incidents he remembers are played out; Indian film star Kamal Haasan, who plays Ram, also wrote and directed the film.

There are no critic reviews yet for Hey Ram. Keep checking Rotten Tomatoes for updates!