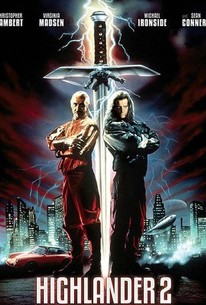 There should have been only one.

At the end of Highlander, Juan Ramirez (Sean Connery) died and Connor MacLeod (Christopher Lambert) was rendered mortal. "Highlander 2: The Quickening begins in 1999 when Connor solves the problem of an ever-depleting ozone layer on the earth by devising a giant shield around the entire planet. The earth is saved, except for the fact that it is now a continual 99 degrees, and the earth is plunged into 24 hours of darkness. 40 years later, Connor is an elderly man with liver spots, heading out for the opera. Then there is a flashback of Connor recalling his halcyon days on the planet Zeist hundreds of years earlier. Back on Zeist, Connor and Ramirez led a futile coup against the ruling dictator, Katana (Michael Ironside), that caused them to be banished to Earth. Back in the future, Katana sends a pair of wacky goons to kill Connor. When Connor lops off their heads, he is now young again...and immortal. Just the right time to meet the attractive scientist Louise Marcus (Virginia Madsen), who has discovered that the shield around the earth is no longer needed since the ozone layer has repaired itself. But, unfortunately, the shield is in the clutches of an evil cartel who wants to control the earth's resources. Connor and Louise team up to battle the cartel while Katana sends out more emissaries to get Connor. Ramirez, although supposedly dead, also makes an appearance in the 21st century -- garbed in full Scottish regalia.

Michel Peyronel
as Kid No. 1

Sebastian Morgan
as Kid No. 2

Daniel Trovo
as Justice No. 2

Diego Leske
as Justice No. 3

Ted McHabney
as TV Newsperson No. 1

Patricia DeBiagi
as TV Newsperson No. 2

Andre Gere
as TV Newsperson No. 3

Jacques Arnot
as Scientist No. 1

Nicolas Deane
as Scientist No. 2

Nicolas Frey
as Yuppie No. 1

Eduardo Nutkiewicz
as Yuppie No. 2

Phillip Brock
as Cabbie
View All

News & Interviews for Highlander 2: The Quickening

Highlander 2: The Quickening Is an Incomprehensible Mess That Deserves Its Bad Reputation
10 Truly Terrible Part Twos
Who’s Up for Some More "Scorpion King"?
View All

Critic Reviews for Highlander 2: The Quickening

Audience Reviews for Highlander 2: The Quickening