History of the World---Part I 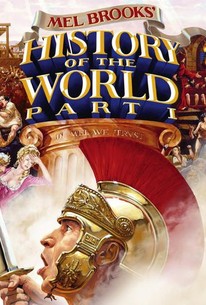 History of the World---Part I

History of the World: Part I may not have enough comedic inspiration to merit a Part II, but the sporadic cleverness of these anachronistic skits are still a testament to Mel Brooks' gift for farce.

History of the World---Part I Ratings & Reviews Explanation

History of the World---Part I Photos

Mel Brooks produced, directed, wrote, and starred in this episodic comedy in the spirit of Monty Python and the 1957 studio travesty The Story of Mankind. The film is divided into five sequences that play like blue-toned Eddie Cantor vaudeville sketches -- "The Dawn of Man," "The Stone Age," The Spanish Inquisition," "The Bible," and "The Future." Also included is a Brooksian depiction of The Last Supper and a long-winded sequence about the French Revolution. The film starts with a 2001: A Space Odyssey parody, narrated by Orson Welles, in which a collection of ape-men learn to stand erect (in more ways than one). The Stone Age reveals the origins of both the first homo sapien and homosexual marriages. Brooks then appears in an Old Testament sequence as Moses, descending from Mount Sinai with three heavy stone tablets bearing the 15 Commandments; after he drops one of these tablets, the laws of God become 10 Commandments. The Roman period picks up with Brooks as Comicus, attempting to get a gig as a "stand-up philosopher" at Caesar's Palace. The Spanish Inquisition is a musical production number with monks torturing Jews to lively Broadway musical strains. The final French revolution section is a broad parody of The Man in the Iron Mask story. The film closes with coming attractions of "History of the World, Part II" that features a rousing Star Wars parody (anticipating Space Balls) called "Jews in Space" that includes a jaunty theme song.

Jackie Mason
as Jew No. 1

RONNY GRAHAM
as Jew No. 2

Jan Murray
as Nothing Vendor

Alan U. Schwartz
as Senator #2

Barry Levinson
as Column Salesman - The Roman Empire
View All

Critic Reviews for History of the World---Part I

Audience Reviews for History of the World---Part I

History of the World---Part I Quotes