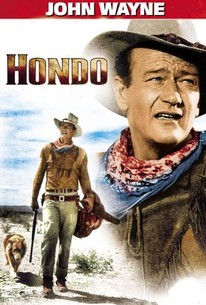 Hondo is so "perfect" a John Ford western that many people assume it was directed by John Ford--or at the very least, Andrew McLaglen. Actually the director was suspense expert John Farrow, who worked with the "Duke" only twice in his career (the second film was an oddball war drama, The Sea Chase [55]). In Hondo, John Wayne plays a hard-bitten cavalry scout who is humanized by frontierswoman Geraldine Page and her young son (Lee Aaker, star of TV's Rin Tin Tin). Try as he might, Wayne can't convince Page to move off her land in anticipation of an Apache attack. He leaves her ranch, only to be ambushed by desperado Leo Gordon--who happens to be Page's long-absent husband. Having killed Gordon, Hondo returns to the ranch to protect Page from the Indians, and to rekindle the woman's hesitant love for him. The climactic attack sequence is enhanced by Hondo's 3-D photography, one of the few truly effective utilizations of this much-maligned process. Long unavailable thanks to the labyrinthine legal tangles of the John Wayne estate, Hondo was finally released to videotape in the early 1990s. ~ Hal Erickson, Rovi

Lassie the Dog
View All

Sausage Party, Milk, and More on Netflix and Amazon Prime This Week
View All