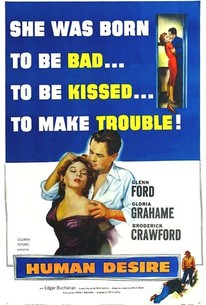 After being fired by the railroad, Carl Buckley (Broderick Crawford) returns home, where his femme fatale wife Vicki (Gloria Grahame) initially sympathizes with his plight. However, she resists Carl's plea to ask Mr. Owens (Grandon Rhodes), an old friend and major freight customer of the railroad, to intercede on his behalf. She finally relents, and they go to the city, where Vicki meets with Owens. When she is successful, Carl accuses her of having an affair with him. He forces Vicki to write a letter arranging to meet Owens on the train. Carl accompanies Vicki to Owens's compartment where he kills him and retrieves the letter to use against Vicki. Spotting Jeff Warren (Glenn Ford), an old railroad buddy and not wanting to be seen, Carl insists that Vicki distract Jeff. Vicki seduces him, beginning an affair in which she so bewitches Jeff that he agrees to kill her husband. An American version of Jean Renoir's version of Emile Zola's novel La Bete Humaine, Fritz Lang's Human Desire is a tragic reminder that jealousy is a self-fulfilling prophecy.

Olan Soule
as Lewis
View All