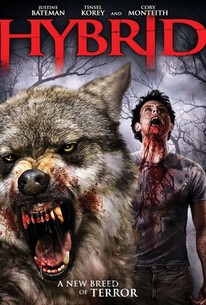 An experimental, cross-species organ transplant causes a young security dispatcher to begin acting on his animal instincts in this curious take on the werewolf legend starring Cory Monteith and Justine Bateman. When Aaron Scates (Monteith) was blinded in an explosion, he thought he would never see again. When Aaron is placed under the care of Dr. Andrea Hewlitt (Bateman), however, it begins to appear as if there may be hope for his sense of sight after all. Renowned for her extraordinary yet controversial medical breakthroughs, Dr. Hewlitt is currently exploring the prospect of animal-to-human organ transplants. When museum curator Lydia Armstrong (Tinsel Korey) arrives at Dr. Hewlitt's office carrying a critically injured wolf, Dr. Hewlitt senses the perfect opportunity to finally put her theories to practice. But while Dr. Hewlitt does manage to successfully transplant the wolf's eyes to her desperate test subject, Lydia makes no secret of her objection to the operation. In the aftermath of the surgery, Aaron not only regains his vision, but acquires such unique abilities as the power to see on the dark and a heightened sense of hearing as well. But when Aaron begins to crave raw steak and target people as prey, it becomes readily apparent that he's undergoing an unusual transformation. Now the only person capable of understanding Aaron's bizarre plight is Lydia, because she, too, is a cross-breed. With the help of her shaman friend Lydia has learned to harness her feral instincts as a source of strength, but will Aaron be capable of accomplishing the same formidable feat, or will his animal instinct ultimately get the better of him?

Will Woytowich
as Mobley
View All