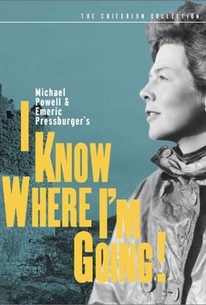 I Know Where I'm Going!

While awaiting access to England's Technicolor cameras for their upcoming super-production Stairway to Heaven, the producer-director team of Michael Powell and Emeric Pressburger dashed off a delightful "personal" project, I Know Where I'm Going. Young middle-class Englishwoman Joan Webster (Wendy Hiller) is determined to have the finer things in life, and to that end she plans to marry Sir Robert Bellinger (Norman Shelley), a wealthy, middle-aged industrialist whom she does not love. En route to the Island of Mull, where her future husband resides, Joan is stranded in a colorful Scottish seacoast town. Inclement weather keeps her grounded for a week, during which time she falls in love with young, insouciant naval officer Torquil McNeil (Roger Livesey). Ignoring the dictates of her heart (not to mention common sense), Joan stubbornly insists upon heading out to sea towards her marriage of convenience, but the exigencies of Mother Nature finally convince her that her future resides on the Mainland. A winner all the way, I Know Where I'm Going is full of large and small delights, including a wonderful sense of regional detail and endearing, three-dimensional characterizations (even the mercenary heroine is a likeable character). The film is easily one of the best of the Powell-Pressburger films of the 1940s, and arguably the team's all-time best romantic drama.

Duncan McIntyre
as His Son

Boyd Stevens
as Singer in the Céilidh

Maxwell Kennedy
as Singer in the Céilidh

Jean Houston
as Singer in the Céilidh
View All

Critic Reviews for I Know Where I'm Going!

Audience Reviews for I Know Where I'm Going!

I Know Where I'm Going! Quotes