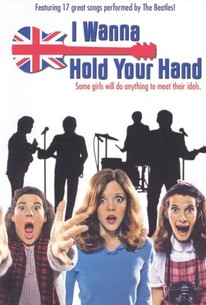 I Wanna Hold Your Hand

Its slapstick humor and familiar plot don't break any new ground, but I Wanna Hold Your Hand succeeds at recapturing the excitement of a pivotal cultural moment.

The time is 1964, and the Beatles, already a hugely popular group, are about to go on the Ed Sullivan Show for the first time, an appearance that launched them into a worldwide phenomenon. Already, girls are fainting during their concerts from sheer excitement at being in the same theater with them. Pam Mitchell (Nancy Allen) is happy enough to be getting married but wants to bed one of the "Fab Four" before she does. Grace Corrigan (Theresa Saldana), a dedicated fan, is certain that if she can get some exclusive photos of the Beatles, her career as a photographer will be secured. And then there are two people who feel that the future of civilization as we know it depends on their efforts to ruin the Beatles' appearance on Ed Sullivan's show. In this madcap comedy, when these people (and others besides) descend on the New York hotel the Beatles are staying in, things begin hopping. This comedy was Robert Zemeckis' first feature. A protégé of Stephen Spielberg, he went on to direct Forrest Gump, Back to the Future, and Who Framed Roger Rabbit? among other popular features.

Will Jordan
as Ed Sullivan

Claude Earl Jones
as A1

Marilyn Moe
as Woman on Elevator

Murray the K
as Himself

Wil Albert
as Goldman
View All

News & Interviews for I Wanna Hold Your Hand

Total Recall: Best Steven Spielberg Productions
Total Recall: Across the Universe And The Beatles On Film
"I Am Legend" — Finally!
View All

Critic Reviews for I Wanna Hold Your Hand

Audience Reviews for I Wanna Hold Your Hand

I Wanna Hold Your Hand Quotes