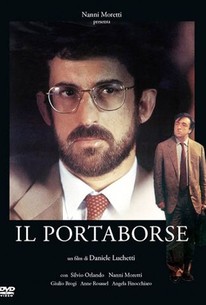 The system established early in the days of the Roman Empire (whereby those who have a powerful patron prosper and no one without a patron can get anywhere) still exists in present-day Italy. Today, this system is given many pejorative labels and is classified as a form of corruption when it intrudes into the political process. In this satire, a schoolteacher (Silvio Orlandi) takes on an extra job as a way of paying for expensive repairs on his ancient home. His sideline job is as a ghostwriter for a political column supposedly written by a representative of a bizarre political party. As a result of this slight involvement, he becomes the favored darling of a series of political bigwigs and is increasingly embroiled in the schemes and rivalries of national politics. While his ethical life is being compromised, the politicians have arranged to have his home declared a national landmark, eligible for government funds for rebuilding, and his material circumstances have improved enormously. When he finally tries to set things right, he soon discovers that the system is rigged against honesty.

Giulio Base
as Autista di Boreto

There are no critic reviews yet for Il Portaborse (The Yes Man). Keep checking Rotten Tomatoes for updates!

There are no featured audience reviews for Il Portaborse (The Yes Man) at this time.