In Which We Serve 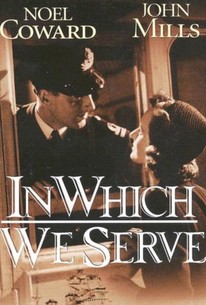 In Which We Serve

In Which We Serve Ratings & Reviews Explanation

In Which We Serve Photos

Few morale-boosting wartime films have retained their power and entertainment value as emphatically as Noël Coward's In Which We Serve. To witness Coward's sober, no-nonsense direction (in collaboration with his co-director/editor, David Lean) and to watch his straightforward portrayal of navy captain Kinross, one would never suspect that he'd built his theatrical reputation upon sophisticated drawing-room comedies and brittle, witty song lyrics. The real star of In Which We Serve is the British destroyer Torrin. Torpedoed in battle, the Torrin miraculously survives, and is brought back to English shores to be repaired. The paint is barely dry and the nuts and bolts barely in place before the Torrin is pressed into duty during the Dunkirk evacuation. The noble vessel is finally sunk after being dive-bombed in Crete, but many of the crew members survive. As they cling to the wreckage awaiting rescue, Coward and his men flash back to their homes and loved ones, and, in so doing, recall anew just why they're fighting and for whom they're fighting. Next to Coward, the single most important of the film's characters is Shorty Blake, played by John Mills. (Trivia note: Mills' infant daughter Juliet Mills appears as Shorty's baby.) Even so, the emphasis in the film is on teamwork; here as elsewhere, there can be no stars in wartime. For many years, the only prints available to television were from the bowdlerized American version, which crudely cut out all "hells" and "damns." Fortunately, this eviscerated American release has since been shelved in favor of the full, glorious 115-minute version.

Derek Elphinstone
as No. One

Jill Stephens
as May Blake

Roddy Hughes
as Photographer
View All

Critic Reviews for In Which We Serve

Audience Reviews for In Which We Serve

In Which We Serve Quotes