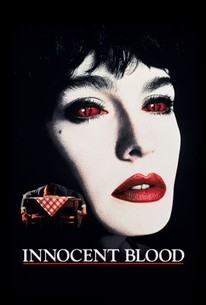 John Landis tries to replicate the quirky gory horror/sick-comedy "vein" he mined in An American Werewolf in London in Innocent Blood. Anne Parillaud plays Marie, a lonely vampire trapped in Pittsburgh and looking for some fresh blood. When a local gang war breaks out, Marie sees it as the perfect cover for her blood feasts. Her plan is to dine on the goodfellas ("What about Italian?" she asks) and then destroy the evidence of her supper with a well-directed gun blast. But the coroner sees something usual when he gets to examine the gangland corpses, "There's a problem. Not enough blood. This guy's about five quarts too low." Meanwhile, an undercover cop named Joe Gennaro (Anthony LaPaglia) begins to suspect that Marie might be responsible for the killings after witnessing her lighter-than-air stunts in a church after some gangsters attack her. Things get more complicated when Marie seduces mob-boss Sal "The Shark" Macelli (Robert Loggia). Unable to finish her snack, Sal escapes and becomes one of the undead -- back from the grave but lusting after blood. Sal wants to start a new race of mob vampires, DeadFellas. This forces Marie to team up with Joe to stop Sal's blood brothers from taking over Pittsburgh.

Angela Bassett
as US Attorney Sinclair

Dan Quayle
as Vice President of the United States