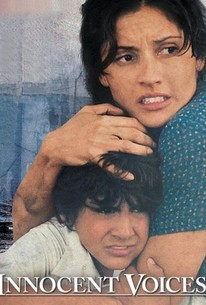 Innocent Voices is a passionately told dramatization of an ugly issue of war -- its impact on children.

The bloody civil war which tore apart El Salvador in the 1980s is seen through the eyes of a young boy in this drama from director Luis Mandoki. Chava (Carlos Padilla) is 11 years old and growing up in a small town in El Salvador where the fighting between rebels and government troops is a daily fact of life. Chava's father has abandoned the family, leaving him behind as the man of the house while his mother (Leonor Varela) and sister try to maintain a normal life by day while dodging bullets by night. Chava's 12th birthday is coming up, which puts the boy in a dangerous position -- at 12, he'll be old enough to join the army and be used as cannon fodder against the rebels, so he and his classmates try to find out when military recruiters will be coming to their schools so they can plan to be absent that day. However, as Chava faces both danger and adventure in his little town, the war edges in closer all the time until it can't be avoided any longer. Voces Inocentes (aka Innocent Voices) was the first Spanish-language film in 18 years for director Mandoki, who came to the United States after the international success of 1987's Gaby: A True Story.

Héctor Jiménez
as Ratón
View All