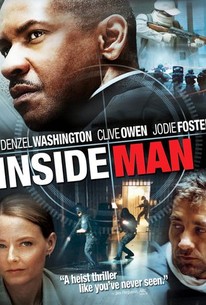 Spike Lee's energetic and clever bank-heist thriller is a smart genre film that is not only rewarding on its own terms, but manages to subvert its pulpy trappings with wit and skill.

2:58
Inside Man: Official Clip - The Hostages Are Released

3:32
Inside Man: Official Clip - Anyone Else Here Smarter Than Me?

The volatile showdown between a determined cop and a perfectionist bank robber is sent spiraling toward disaster when a scheming power broker steps in to take control of the situation in this hair-raising heist flick directed by Spike Lee and starring Denzel Washington, Clive Owen, and Jodie Foster. Dalton Russell (Owen) is a bank robber with a difference. In his quest to execute the perfect heist, Dalton has taken every possible factor into consideration. Dalton's uncanny ability of staying one step ahead of the law thwarts even-tempered Detective Keith Frazier's (Washington) best efforts. But there's another factor at play. The bank president (Christopher Plummer) has requested the services of high-profile negotiator Madeline White (Foster). Despite her commendable track record, Madeline is something of a wild card, and before the day is over, this bank robbery will go down in history as one of the most elaborate heists ever executed. ~ Jason Buchanan, Rovi

Bernie Rachelle
as Chaim
View All

News & Interviews for Inside Man

Critic Reviews for Inside Man

Audience Reviews for Inside Man