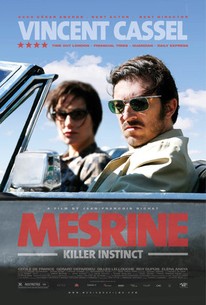 This tough and gritty French-language crime drama represents the premier installment in a two-part series of features on the life and doings of notorious Gallic hood Jacques Mesrine (1936-1979). Mesrine is played, in both installments, by actor Vincent Cassel, who reportedly underwent massive weight gain and weight loss to convincingly portray the volatile Mesrine at various periods of his life. Director Jean-François Richet begins in 1979, with Mesrine's uncommonly violent death, whereby he and a beautiful young woman are suddenly (and fatally) ambushed by Parisian police not far from Mesrine's place of birth. Richet then flashes back to the Franco-Algerian War of the late '50s and a brutal interrogation undergone by Mesrine. Following a military discharge, Mesrine returns to his parents' suburb of Clichy, where his dad has arranged a pathetic job for him in a lace-making factory. Never one to take humiliation lying down, Jacques perceives burglary, larceny, and racketeering as much-superior options and decides to pursue a life of crime via a "business partnership" with childhood buddy Paul (Gilles Lellouche), who works for mobster Guido (Gérard Depardieu). As the years pass, Jacques works his way up through the ranks of the underworld; via Paul, he also meets and falls hard for two women: Pigalle streetwalker Sarah (Florence Thomassin), and Sofia (Elena Anaya), a beautiful Spanish woman with whom he cohabitates after doing time in a French prison. Following a brief and unsuccessful attempt to "go straight," Jacques reconnects with Guido, then finds it necessary to escape from France to Canada with his new mistress, Jeanne (Cécile De France). Unfortunately, another prison sentence is waiting for him there, replete with brutal solitary confinement, but the possibility of a daring escape beckons. The second half of the Mesrine saga, entitled Mesrine: L'Énnemi Public No. 1 for French release, followed immediately after and picks up where this installment wraps.

Georges Wilson
as The Billionaire