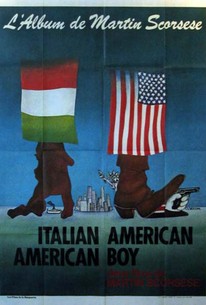 In this warm, funny, and illuminating documentary, filmmaker Martin Scorsese interviews his parents, Catherine and Charles Scorsese, in their modest apartment in New York's Little Italy. The casual and relaxed atmosphere of the film makes viewers feel as if they are eavesdropping on an intimate family evening. Catherine prepares tomato sauce and meatballs while explaining how she learned to cook from her mother and mother-in-law as a young woman. After looking at vacation photos while sitting on the plastic-slip-covered living-room sofa, the family shares dinner together. Much is revealed as son Marty gently guides the conversation with questions revolving around what life was once like for Catherine and Charles and their parents, and contemporary street scenes, archive shots, and family photos are interspersed among the responses. What emerges is a vivid personal view of history, a slice of life as it was lived during the first half of the 20th century in New York and in Italy. The film also indirectly sheds some light on the environment and the influences that shaped the creative vision of Martin Scorsese, a passionate, intense, and original filmmaker. The film's end credits include the recipe for Catherine Scorsese's tomato sauce.

Catherine Scorsese
as Herself

Charles Scorsese
as Himself

Martin Scorsese
as Himself