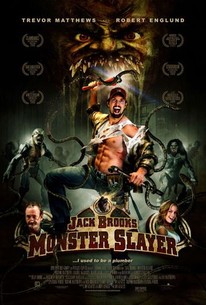 A sincere but sometimes-excessive send up of low-rent horror hokum, Jack Brooks: Monster Slayer features some sharp laughs and features a scene-stealing performance by Robert Englund.

Consumed by rage after watching his family get viciously slaughtered by a demonic beast, an angry plumber receives a chance to redeem himself after inadvertently unleashing an ancient evil. As a young boy, Jack Brooks' entire life was forever changed during a fateful camping trip. Having survived the slaughter by simply turning heel and running as fast as possible, Jack simply cannot forgive himself for allowing his fear to take over. These days, Jack (Trevor Matthews) is a local plumber with some serious rage issues. One day, while attempting to repair some pipes for Professor Crowley (Robert Englund), the hotheaded handyman awakens an evil the likes of which this world has never seen. Later, Professor Crowley is drawn to this evil energy, and compelled to consume a black heart that possesses his soul, and transforms his body. Now the evil has spiraled out of control, leaving one hapless, haunted plumber to finally harness his all-consuming anger for the powers of good, and face the forces of darkness that once robbed him of his entire family. ~ Jason Buchanan, Rovi

James A. Woods
as John

Brennan Delaney
as Student No.1

Valerie Casault
as Student No.2

Pascal Petardi
as Janitor
View All