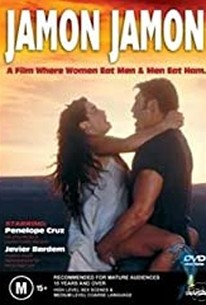 It isn't as provocative or amusing as it pretends to be, but Jamón Jamón's cheerfully overheated melodrama is often its own reward.

Class, sex, and food are the obsessions of this Spanish comedy drama, an international hit from writer and director J.J. Bigas Luna that plays like a cross between the lusty Like Water for Chocolate (1992) and the early work of Pedro Almodovar. In a small town in Spain's arid Monegros region, young underwear factory executive Jose Luis (Jordi Molla) falls in love with the beautiful Silvia (Penelope Cruz), a worker on the shop floor. When Silvia becomes pregnant, Jose Luis wants to marry her, but his mother Conchita (Stefania Sandrelli), the factory owner, is appalled by the thought of her son marrying a working-class girl, especially one who is the daughter of a prostitute, Carmen (Anna Galiena). So Conchita hatches a scheme to woo Silvia away from her son by hiring handsome model Raul (Javier Bardem) to seduce the girl. A ham factory employee with aspirations to become a bullfighter, Raul's charms work their magic on both Silvia and Conchita, much to the dismay of Jose Luis, who seeks comfort in the arms of his sometime lover, Carmen. Jamon Jamon (1992) was the winner of a Silver Lion at the Venice Film Festival.

Miguel Garcia
as Friend at Disco

Marianne Hermitte
as Girl in the Brothel
View All