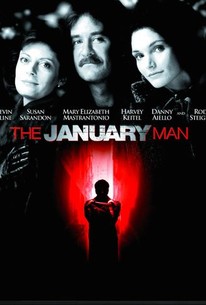 2:13
The January Man: Official Clip - Still Mad About You

2:02
The January Man: Official Clip - Take Off Your Clothes

This offbeat police thriller with heavy doses of humor was written by John Patrick Shanley, the former playwright who wrote Cher's hit romantic comedy Moonstruck. Kevin Kline stars as Nick Starkey, a brilliant former New York City police detective who has been exiled to the fire department because of his unorthodox ways. He's called back to service by his police commissioner brother Frank (Harvey Keitel) in the hopes that he can find a bizarre serial killer who's been murdering one woman a month. Nick's condition to agreeing to help is that he gets to cook dinner for Frank and his snooty wife Christine (Susan Sarandon), a former girlfriend of his. Ultimately, Nick uses his Zen-like intuition and some high-tech computer hardware (with prominent product placement plugs) to find the killer, pausing to have an affair with the mayor's beautiful daughter Bernadette (Mary Elizabeth Mastrantonio. In the improbable conclusion, Nick figures out the exact day the killer will strike and the exact apartment! January Man is too tongue-in-cheek to be taken seriously as a thriller. In addition to Keitel and Sarandon the stellar supporting cast includes Rod Steiger as the mayor and Danny Aiello as a tough police captain who rails against Nick's "beatnik" ways.

Richard Johnson
as Newscaster-Reporter
View All

Critic Reviews for The January Man

Audience Reviews for The January Man