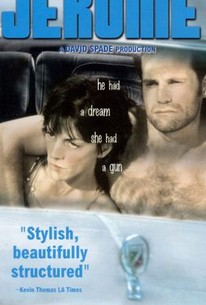 Nearly everyone has some kind of secret, hidden dream. Listen closely to everyday working class people punching a time-clock, living with building frustrations of what life has given them and you will most likely hear of such dreams. They are often fueled by the phrase, "One day I'm gonna quit, tell the boss to shove it, and never look back." Of course, for most people these are only words, not serious threats, merely a pressure release which allows them to escape the grind for one short instant, briefly enabling their human spirit to soar before having to cage it once again. "Jerome" is a day-in-the-life story of one such dreamer, Wade Hampton, an introspective man in his late thirties who has found himself trapped by responsibility and a lack of understanding by those around him. We meet him on an assembly line in a factory in Bakersfield, California, where he has spent eight hours a day for the last fifteen years as a welder, dreaming away amongst thick smoke, the constant flash of sparks and the mind-numbing grind of machinery. On this particular day, Wade reaches a state of critical mass which propels him to literally walk away from the job, his family, his friends, and all the responsibilities that come with them. He simply leaves his old life to start over again, to fulfill his secret dream of becoming an artist and living in a small, remote Arizona town, Jerome--a place he knows only through a postcard given to him years earlier by a co-worker who passed through on a family vacation.

Richard Feld
as Trucker in Diner

There are no featured audience reviews for Jerome at this time.