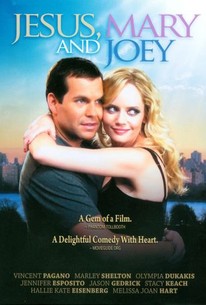 Love brings a shiftless young man in touch with the Lord, which proves more than a bit confusing to his family in this independent comedy drama. Joey Vitello (Vincent Pagano) is a guy in his mid-twenties who still lives with his extended Italian-American family and his trying to get his life in order. One day, Joey unexpectedly crosses paths with Mary O'Callahan (Marley Shelton), a girl who was one of his classmates in grade school. While Mary was homely as a child, she grew into a beautiful woman, and as Joey gets caught up on what she's been doing, he learns Mary survived a bout with cancer and credits her survival to a miracle from God. As Joey becomes deeply infatuated with Mary, he finds himself embracing her spiritual beliefs, but as he tries to share his enthusiasm with his family, they seem more than a bit suspicious, and in time decide that maybe they should be able to have a miracle of their own. Jesus, Mary and Joey also stars Olympia Dukakis, Jennifer Esposito, Tess Harper, and Stacy Keach.

Charles Durning
as Teddy the Bartender

There are no critic reviews yet for Jesus, Mary and Joey. Keep checking Rotten Tomatoes for updates!

There are no featured audience reviews for Jesus, Mary and Joey at this time.