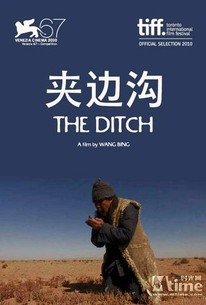 One of the most shocking and shameful episodes in Chinese history is reenacted with painful accuracy in this historical drama. In the mid-1950s, Chinese scholars, authors, and political analysts were invited to share their ideas about the nation's policies and progress as part of a campaign launched by Mao Zedong; however, a few years later, those who had been foolish enough to express skepticism about Communism or China's leaders found themselves sentenced to "re-education camps" in the Gobi Desert, where inmates were forced to perform grueling labor day in and day out. Adding to the punishment, as China was in the midst of a famine, the prisoners were never adequately fed, and most of them were literally worked or starved to death. The Ditch follows a handful of men at the Jiabiangou Re-education Camp over the course of three months in 1960, focusing on two close friends, Xiao Li (Lu Ye) and Lao Dong (Yang Haoyu), who are pushed to the outer limits of human endurance. The Ditch was the first narrative feature from filmmaker Wang Bing, who had previously examined the darker aspects of Chinese history in the documentaries West Of The Tracks and Fengming.

Critic Reviews for Jiabiangou (The Ditch)

There are no critic reviews yet for Jiabiangou (The Ditch). Keep checking Rotten Tomatoes for updates!

Audience Reviews for Jiabiangou (The Ditch)

There are no featured audience reviews for Jiabiangou (The Ditch) at this time.