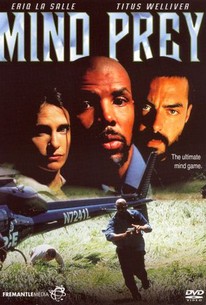 Lucas Davenport, the wily (and very sexy) computer-programmer detective created by novelist John Sandford, comes to the small screen in the form of actor Eriq LaSalle) in this made-for-TV adaptation of Sandford's best-seller Mind Prey. A nutcase named John Mail (Titus Welliver) escapes from a mental institution and kidnaps his therapist (Sheila Kelley) and her two daughters. Though he intends to exact revenge against his captive for having him put away, Mail intends to prolong the agony by playing a cruel game of cat-and-mouse with the police, leaving behind a number of cryptic computer clues to his whereabouts. It is up to Lucas Davenport to make sense of these clues--and to figure out there is more to the story than a simple kidnapping. Fans of John Sandford were not entirely happy with the literary liberties taken in this adaptation, but since star Eriq La Salle was also one of the producers, it isn't surprising that the main character would be reshaped to suit his established TV persona. Reportedly the pilot for an unsold weekly series, John Sandford's Mind Prey originally aired March 22, 1999 on ABC.

Dara Perlmutter
as Genevieve
View All

There are no critic reviews yet for John Sandford's Mind Prey. Keep checking Rotten Tomatoes for updates!

There are no featured audience reviews for John Sandford's Mind Prey at this time.