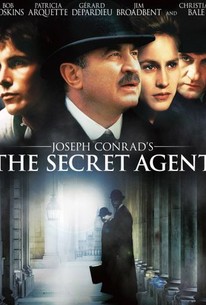 The sophomore directing effort by Dangerous Liaisons screenwriter Christopher Hampton, following Carrington, The Secret Agent is a well-performed but dramatically sluggish adaptation of the novel by Joseph Conrad. Set in London during the late 1880s, the film centers around Verloc; owner of a small pornography shop, he is a spy in the service of the Russian government. Far from the glamorous modern image of the secret agent, Verloc is a mere functionary who writes regular reports on a group of exiled anarchists he has infiltrated and does little else. The changing political mood, however, has led his supervisor to demand results. In order to encourage a British crackdown on anarchists, Verloc is ordered to stage a bombing of the Royal Observatory. The attack does not go as planned, however, resulting in tragedy for Verloc and his family, particularly his beautiful young wife Winnie and his mentally challenged stepson Stevie. Straddled uneasily between the strategies of a traditional suspense film and a more distant flashback structure, the film never achieves a confident dramatic momentum. Regardless, there are numerous strong performances, including a notably unnerving supporting turn by Robin Williams as an obsessive, potentially suicidal explosives expert.

Robin Williams
as The Professor

Peter Vaughan
as The Driver

Julian Wadham
as The Assistant Commissioner