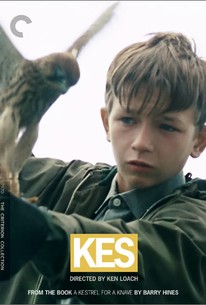 A harrowing coming of age tale told simply and truly, Kes is a spare and richly humane tribute to the small pockets of beauty to be found in an oppressive world.

In this 1969 Ken Loach film, a 15-year-old named Billy Casper (played by acting newcomer David Bradley) suffers abuse both at home and at school in Yorkshire, England. At his home in the working-class section of Barnsley, Billy's brother beats him and his family neglects him. At school, most of his teachers ridicule and reject him, especially sadistic Mr. Sugden (Brian Glover. Like other downtrodden children in an outmoded social system favoring the ruling class, Billy appears headed for a menial job with no future. Consequently, he has no motivation and nothing to look forward to, until the day he finds a kestrel -- a European falcon with the ability to hover against strong wind. The bird, a fledgling, is akin to the boy, who must withstand winds of his own. It is not surprising, therefore, that Billy finds meaning in befriending and caring for the baby kestrel. He raises, nurtures, and trains the falcon, whom he calls "Kes." Its development gives him hope that he too will one day develop, that he too will gain the skills to fly against the wind. Then Billy opts to spend his brother's track money on food for Kes, which sets the stage for a grave disagreement betwen the young men and an unhappy outcome. ~ Mike Cummings, Rovi

Joey Kaye
as Comedian at Pub

Bill Dean
as Fish and Chip Shop Man
View All