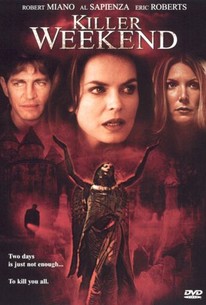 Murder makes an unexpected appearance at a relaxing weekend getaway in this mystery. Tom (John Castellanos) and Janet (Jennifer Farrell) are a couple who have invited four of their friends up to their beach house for the weekend: Jack (Eric Roberts) and Sasha (Cyrielle Claire), and Michael (Al Sapienza) and Olivia (April Fissell). Jack is a successful and powerful businessman, Michael and Janet work for him, Janet is his trophy wife, Olivia is Jack's niece, and Tom is a well-known children's television personality. Jack and Sasha's marriage has not been smooth lately, with each certain the other is having an affair, and an evening of romantic misadventures among the three couples comes to an unexpected conclusion when Jack is found dead. Police detective Luke Nicolleti (Robert Miano) is brought in to investigate, and when it becomes obvious Jack was the victim of foul play, the question is which of the five survivors is responsible. Jennifer Farrell, who played Janet, also wrote the film's screenplay.

Eliza Roberts
as Maria
View All

There are no featured audience reviews for Killer Weekend at this time.