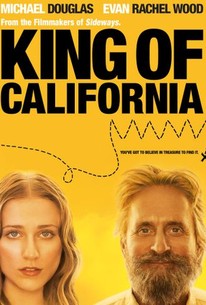 A quirky and often touching comedy about a mature teenager and her manic depressive father, King of California is a charming tale of familial relations and treasure hunting.

At the age of 16, Miranda has already had to live with her share of disappointments. Abandoned by her mother, she's dropped out of school and has been supporting herself as an employee at McDonald's while her father Charlie resides in a mental institution. When Charlie is released and sent back to their home, Miranda finds the relatively peaceful existence she's built for herself completely disrupted. Charlie has become obsessed with the notion that the long-lost treasure of Spanish explorer Father Juan Florismarte Garces is buried somewhere near their suburban California housing unit. Armed with a metal detector and a stack of treasure-hunting books, Charlie soon finds reason to believe that the gold resides underneath the local Costco, and encourages Miranda to get a job there so that they can plan a way to excavate after hours.

Anna Khaja
as Off. Contreras

Will Rothhaar
as Estate Security Guard

News & Interviews for King of California

Critical Consensus: Brave One Isn’t Tops, Mr. Woodcock is Flaccid, Hunting Party is Busted
Sundance Reviews: Short and Sweet, A Review Roundup
Sundance News: "The Ten" And "King of California" Picked Up For Distribution
View All

Critic Reviews for King of California

Audience Reviews for King of California