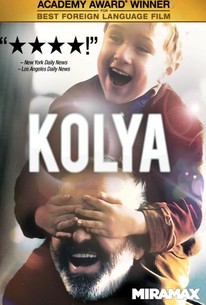 55-year-old Louka (Zdenek Sverak) is a gifted musician in Czechoslovakia who once made a good living playing in the State Symphony Orchestra. However, he has little use for the government, and after putting a playfully insulting statement on a government form, he's been banished from official music making. He ekes out a living by giving private lessons, painting gravestones with gold leaf, and performing at funerals. Louka also likes to chase younger women, a surprisingly number of whom are more than happy to be caught. However, when a friend suggests marriage to a stranger, Louka is unexpectedly willing to consider the matter. It seems that Broz (Ondrej Vetchy), a gravedigger and a good friend of Louka's, has a niece, Nadezda (Irena Livanova), with a young son who wants to stay in Czechoslovakia. However, she's a Russian citizen and lacks the proper papers. In order to stay, the young mother needs to marry a Czech citizen, and she and her aunt are willing to pay a "husband" for his troubles. Louka, hard up for cash and in need of a used car, grudgingly agrees to the arrangement and weds Nadezda. However, once she has her papers, Nadezda heads for West Germany to be with her boyfriend, and after her aunt unexpectedly dies, Louka finds himself in custody of his new "stepson," six-year-old Kolya (Andrei Khalimon). A confirmed bachelor, Louka knows next to nothing about taking care of a child, and he discovers that parenthood cramps his style with the ladies. However, Louka and Kolya soon become good friends, and Louka finds his outlook on life beginning to change, just as the "Velvet Revolution" sounds the call of a new era in Czechoslovakia. Kolya won both the Academy Award and the Golden Globe as Best Foreign Language Film of 1997. ~ Mark Deming, Rovi