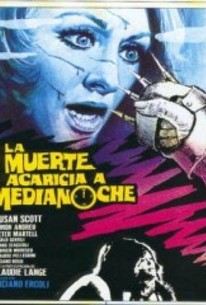 A favorite among fans of outrageously bad films, this bloody, convoluted thriller deals with a model named Val (Nieves Navarro), whose tabloid-reporter boyfriend, Gio (Simon Andreu), talks her into experimenting with drugs. While she hallucinates, Val looks out the window and sees a man in dark glasses smashing a spiked iron glove into a woman's head until blood splashes into the camera lens. When Gio publishes the story, Val gets fired and is stalked by a psychopath. Before it's all over, there are trips to mental hospitals and graveyards, as many as four different killers taking part in three separate frame-ups, a cat with a slashed throat, and a ludicrous rooftop fight scene featuring choreography rarely seen outside of bad Asian karate films. The high point has a hitman (who laughs like a hyena) throwing a knife between two buildings only to have Gio catch it in a shovel-handle. Most of the film consists of people calling Val crazy or stupid, only to have Val slap them or knee them in the groin, spitting "Go to Hell!" before marching out of the room. The remaining scenes have Val herself being slapped around, followed by all the men she previously told to go to Hell smashing each other through skylights and pushing each other's faces into bags of quicklime. The screenplay (by Ernesto Gastaldi, Sergio Corbucci, and others) makes very little sense, but is such laughably camp fun that it doesn't matter.

There are no critic reviews yet for La Morte Accarezza a Mezzanotte (Death Walks at Midnight). Keep checking Rotten Tomatoes for updates!

There are no featured audience reviews for La Morte Accarezza a Mezzanotte (Death Walks at Midnight) at this time.