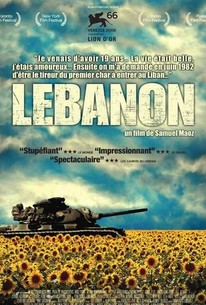 A powerful and personal account of war on the front line, writer-director Samuel Maoz takes the viewer inside an Israeli tank to deliver an exhausting, original film.

The First Lebanon War - June, 1982. A lone tank is dispatched to search a hostile town that has already been bombarded by the Israeli Air Force. What seems to be a simple mission gradually spins out of control. Shmuel the gunner, Assi the commander, Herzl the loader and Yigal the driver are the tank's crew, four 20-something boys who have never fought in a war and are now operating a killing machine. Though trying to remain brave, the boys are pushed to their mental limits as they struggle to survive in a situation they cannot contain, and try not to lose their humanity in the chaos of war. Writer-director Samuel Maoz's raw and visceral film is based on his own experiences as a twenty year old novice soldier serving in the Israeli army during the 1982 Lebanon war. Using his own vivid recollections to bring us inside an Israeli tank during the first 24 hours of the invasion, Maoz restricts the film's action entirely to the tank's interior and shows us the outside world only-as the four young soldiers themselves see it-through the lens of a periscopic gun sight. The cathartic process of writing and directing LEBANON allowed Maoz to finally free himself of the events that he had experienced twenty-five years earlier.-- (C) Sony Pictures Classics