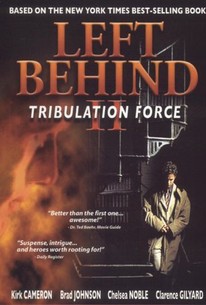 Four people of faith must take it upon themselves to save the soul of humanity in this sequel to Left Behind. When millions of people around the world suddenly disappear into thin air, the entire globe is thrown into chaos, and in the midst of this confusion and uncertainty, Nicolae Carpathia (Gordon Currie), international media magnate and president of the United Nations, steps forward as the leader who will guide all the world's nations in this difficult time. However, television journalist Buck Williams (Kirk Cameron) knows the truth behind what has happened -- the mass disappearances were the result of the Rapture, predicted in the Holy Bible as the beginning of the End Times, and Carpathia is, in fact, the Antichrist. Williams falls in with three remaining believers -- pastor and biblical scholar Bruce Barnes (Clarence Gilyard Jr.), airline pilot-turned-believer Rayford Steele (Brad Johnson), and Steele's headstrong 20-year-old daughter, Chloe (Janaya Stephens). Calling themselves the Tribulation Force, the foursome travel the world, attempting to spread the word about Carpathia and tending to the needs of the wounded; in the course of their work, Buck and Chloe fall in love, while Barnes comes to terms with the loss of his wife and child. But when sinister events occur in Israel at the site of the Wailing Wall, the Tribulation Force suspects Carpathia may have some more unpleasant surprises up his sleeve. Adapted from the popular series of Christian thrillers by Rev. Tim LaHaye and Jerry B. Jenkins, Left Behind II: Tribulation Force, like the first Left Behind picture, was produced by Christian production company Cloud Ten Productions; both films were first marketed on home video, and later released to theaters to widen their public profile. ~ Mark Deming, Rovi