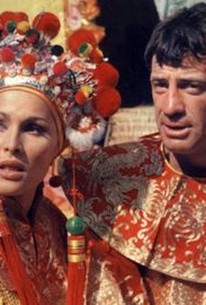 Arthur Lempereur (Jean-Paul Belmondo of Breathless) is a globe-hopping millionaire, engaged to Alice (Valérie Lagrange), a beautiful young woman. As the film opens, Arthur has cut the break line on his fine automobile and proceeds to drive it off a cliff. This, we learn, is his ninth suicide attempt in the past week. Arthur is bored with his easy life. Even learning from his accountant, Biscotton (Darry Cowl), that he's ruined doesn't perk him up. On a cruise to Hong Kong, his friend Mr. Goh (Valéry Inkijinoff) comes up with a solution to Arthur's woes: "Adversity carries the chance for happiness," he explains to the despondent young man. Goh convinces Arthur to take out a two-million-dollar life insurance policy, with Goh and Alice as the beneficiaries. The policy will expire in one month. Goh then tells Arthur that his life is in danger. He may be killed at any moment. Arthur soon realizes that he's being followed. He's not so eager to be murdered. Arthur and his valet, Leon (Jean Rochefort of The Hairdresser's Husband), frantically search for Goh to ask him to call off the hit. At one point, Arthur ducks into a nightclub to dodge his pursuers, and instantly falls for Alexandrine (Ursula Andress), the stripper on-stage. Alexandrine is fascinated by the ways men try to manipulate women and assumes that Arthur's story about hired killers is a bizarre ruse. All the more determined to survive the month, the bumbling Arthur engages in a fierce battle for his life. Up to His Ears is both a loose adaptation of a Jules Verne story (Les Tribulations d'un Chinois en Chine) and a hyped-up return to the form of director Philippe de Broca's previous action comedy, That Man from Rio, which also starred Belmondo.

Darry Cowl
as Biscoton
View All

There are no featured audience reviews for Les Tribulations D'Un Chinois En Chine at this time.