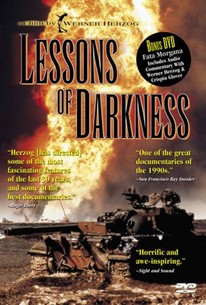 Straddling a line between documentary and science fiction, Werner Herzog's Lektionen in Finsternis is an epic visual poem set in the burning oil fields of Kuwait following the 1990-1991 Persian Gulf War. Herzog, as much a daredevil as a documentarian, took his small crew in a helicopter and, floating above the fields, photographed jaw-dropping footage of the blazing, blackened landscape. Alternately horrific and majestic, the movie is a phantasmagoric, if distanced, catalog of horrors. Boiling lakes of crude oil, twisted scraps of melted metal, and ominous billows of smoke and fire abound. On the ground, the images are just as otherworldly. Herzog filmed scenes of firemen in full-body suits, working -- futilely it seems -- to contain the blaze. There are also a couple of interviews with Kuwaiti women, who talk heartbreakingly of the brutalities they suffered at the hands of Iraqi soldiers. In his voice-over narration, Herzog assumes the identity of a spectator from another planet, making bemused comments about the catastrophe with no attempt to inform the viewer of the factual circumstances behind it. His high-flown rhetoric, dense with mythical portent and allusiveness, underscores this visionary movie's detached view of the destruction of the Kuwaiti oil fields.

Critic Reviews for Lessons of Darkness

Audience Reviews for Lessons of Darkness