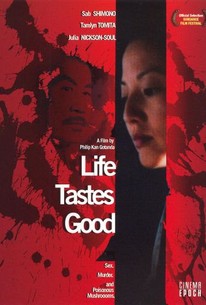 Asian-American playwright Philip Kan Gotanda made his directorial debut with this unusual crime drama. When two San Francisco police detectives find a very dead body in an abandoned car, a bit of digging reveals the man was minor-league criminal Harry Sado (Sab Shimono), who left behind his story in his own words -- on tape. Harry's troubles began when he discovered his partner, Mr. Jones (Philip Kan Gotanda), was ripping him off. Harry's logical response was to start ripping off his partner, which led him to hide out in San Francisco. There Harry tied to reunite with his children, which proved to be more trouble than it was worth, and met a mysterious woman who once lived in the apartment Harry had rented. Once Mr. Jones tracked Harry down, though, a confrontation between these two bad men was inevitable. Life Tastes Good was shown as part of the American Spectrum series at the 1999 Sundance Film Festival.

Julia Nickson
as The Woman

There are no critic reviews yet for Life Tastes Good. Keep checking Rotten Tomatoes for updates!

There are no featured audience reviews for Life Tastes Good at this time.