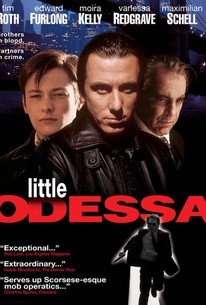 A somber portrait of organized crime and family trauma, Little Odessa centers on the trouble caused when hit man Joshua Shapira (Tim Roth) returns to his old neighborhood of Brighton Beach, Brooklyn. A hired killer for the Russian Mafia, Joshua is given an assignment in his hometown, where he renews contact with his younger brother Reuben (Edward Furlong) and an old flame (Moira Kelly). But others do not welcome Joshua's return, particularly his harsh, estranged father (Maximillian Schell), who had disowned Joshua years before and currently attempts to keep him from visiting his seriously ill mother (Vanessa Redgrave). The pressure of these family crises combine with Joshua's deepening involvement in the local crime scene, ultimately triggering a bloody confrontation. First-time director James Gray creates a solemn, oppressive atmosphere that emphasizes the already grim nature of his story. The slow pace and familiar crime narrative were attacked by many viewers, contributing to a mixed critical reaction, but Little Odessa nevertheless won admiration for Gray's visual sense and the skilled performance by Roth in the unsympathetic lead role.

Ron Brice
as Man with one leg

Natalya Andreichenko
as Natasha
View All