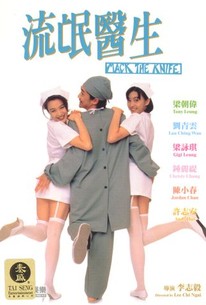 Busy Hong Kong film star Tony Leung headlines as the brilliant doctor Lau Mack in this appealing comedy-drama from writer/producer/director Lee Chi-ngai, based on a popular Japanese manga novel. Dr. Mack's practice is set in the Hong Kong red-light district, but this rather humbling fact belies his immense talent. Dr. Mack once worked with Dr. Roger Jaw (Alex To), who is considered to be the nation's best surgeon and is being considered for chairman of his hospital's board of directors. Of course, Mack is really a better doctor, and actually handed Roger his current position by taking responsibility for a mistake that his friend made when they were in medical school together. That ruined Mack's reputation, and he had to go to a small country in Africa to get his degree. Now he works in the ghetto, and when a robber gets shot in the head outside his clinic, Mack offers consultation to Roger on the difficult surgical techniques necessary to save him. Naturally, Roger takes all the credit, positively basking in the plaudits which come his way, and does it again with a wounded boy scout whom Mack actually saved. Disgusted by the surgeon's behavior, Dr. Sam So (Andy Hui) leaves his position at the hospital and goes to work with Mack. Roger's behavior also upsets his girlfriend Jamie (Christy Chung), who starts falling for Mack. That's when romance brews for everyone, as Sam falls for a terminally ill cancer patient named Zin (Hilary Tsui), and local undercover cop Chiu (Lau Ching-wan) falls for a hooker with a heart of gold, the beautiful Lok Mei (Eileen Tung). Roger gets his comeuppance, and almost everyone else lives happily ever after. Gigi Leung co-stars with Richard Ng, and action veteran Law Kar-ying even shows up as a street preacher.

Andy Hui
as Dr. Sam So

Gigi Leung
as May

Farini Cheung
as Nurse
View All

There are no critic reviews yet for Liu mang yi sheng (Doctor Mack). Keep checking Rotten Tomatoes for updates!