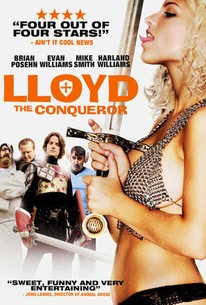 Three college slackers join their Medieval Literature professor's LARPing league in order to pass the class, and keep their financial aid in this geek-fueled comedy starring metal-head comic Brian Posehn. Their grades slipping, hard-partying college students Lloyd, Patrick, and Oswald plead with the professor Derek to give them some much-needed extra credit. In order to earn it, Derek insists that they arm themselves with foam swords, and participate in an epic game of Demons & Dwarves. A former LARP champion, Derek's stint in academia has weakened his skills on the battlefield. But Lloyd is determined to help Derek in his fight against the dreaded Horde of Chaos, and he knows just the right people to ensure victory. A former cage fighter who teaches female self-defense course, Cassandra possesses both beauty and brawn; likewise, local gaming merchant Andy (Posehn) possesses the skills of a White Wizard - a notable advantage in the struggle against darkness. Still, it remains to be seen whether this mighty crew will be any match for the fierce Danes, hulking lunatic Leopold, and a stern Vulcan with the power of Starfleet on his side. ~ Jason Buchanan, Rovi

Critic Reviews for Lloyd The Conqueror

Audience Reviews for Lloyd The Conqueror

There are no featured audience reviews for Lloyd The Conqueror at this time.