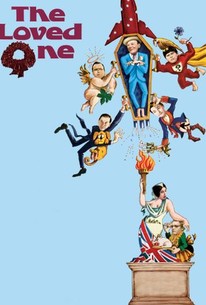 The Loved One Ratings & Reviews Explanation

The Loved One Photos

The satire in Evelyn Waugh's darkly comic novel The Loved One was originally double-edged. The book was not only an attack on the Southern California funeral industry but also a lampoon of Hollywood's "British colony," those clannish, cricket-playing English actors of years gone by who bemoaned the artificiality of Tinseltown while eagerly accepting the demeaning and insignificant movie roles they were offered. The film version of The Loved One, anxious to live up to its ad-campaign promise of containing "something to offend everybody," downplays the British-colony business (save for the presence of the magnificent Robert Morley) and pumps up the "death" gags. Innocent British poet Dennis Barlow (Robert Morse) falls in love with funeral-home cosmetician Aimee Thanatogenos (Anjanette Comer), who in turn is loved by prissy funeral director Mr. Joyboy (Rod Steiger). The latter lives with his obese mother (Ayllene Gibbons), whose eating sequence is far more hilarious (and more tasteless) than many of the film's calculatedly "black" jokes. A huge guest-star cast is headed by Jonathan Winters in a dual role as a funeral home manager and his covetous twin brother, who operates an elaborate pet cemetery. Musician Paul Williams is also on hand as a 13-year-old aeronautics genius who develops a method of sending corpses into "eternal orbit" (a plot device that Waugh neglected to include in his novel). Film historian William K. Everson has commented that The Loved One is one of the best and most underrated comedies of the 1960s. For others, especially those who might feel guilty chuckling at the sight of Anjanette Comer committing suicide with an embalming needle, it's purely a matter of taste...or lack of same.

Reta Shaw
as Manager of The Zomba Cafe
View All

Critic Reviews for The Loved One

Audience Reviews for The Loved One

The Loved One Quotes