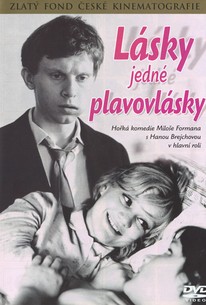 Out in the Czech countryside, a shoe factory owner petitions the People's Army to station a division of soldiers in his town, where the women outnumber the men sixteen to one. The arrival of the troops is greeted with great excitement, but the girls in the town are disappointed to see that the men are older reservists, and not the strapping young men they'd envisioned. Still, when a band plays at the local pub, the girls show up to be ogled by the older men, many of whom are married. A trio of reservists sends a bottle of wine to Andula (Hana Brejchova), Marie (Marie Salacova), and Jana (Jana Novakova), and the girls argue over whether or not to acknowledge the gesture. But Andula catches the eye of the comparatively dashing young pianist, Milda (Vladimir Pucholt). Milda convinces Andula to go to his room, where he seduces the mildly reluctant girl. The next morning, the traveling musician assures her repeatedly, "I do not have a girlfriend in Prague." Milda leaves town, as expected, but Andula has fallen in love with him, and decides to journey to Prague to track him down. A low-key black-and-white ensemble comedy, Loves of a Blonde was cast predominantly with non-professional actors. The film was nominated for an Oscar for Best Foreign Language Film, drew a lot of attention to the "Czech New Wave," and jumpstarted the international filmmaking career of director Milos Forman (One Flew Over the Cuckoo's Nest). ~ Josh Ralske, Rovi

Jan Vostricil
as Colonel
View All

Critic Reviews for Loves of a Blonde (Lásky jedné plavovlásky)

Audience Reviews for Loves of a Blonde (Lásky jedné plavovlásky)