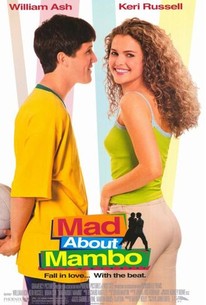 A throw back to earlier films like Strictly Ballroom, Mambo is a competent but ultimately dull film.

An Irish boy obsessed with sports finds his life changing dramatically once he adds a little Salsa to his life in Mad About Mambo. Danny (William Ash) plays on the football team (called soccer in America) at the all-boys Catholic school he attends in Belfast. Danny's three best friends, who also play on the team, all have different ambitions for their lives. Mickey (Paul McLean) wants to be a fashion designer so he can get rich and date supermodels. Gary (Russell Smith) wants to become a magician so he can get rich and meet beautiful women (and presumably saw them in half). And Spike (Joe Rea) likes to beat people up, so he wants to become a mercenary and do it for a living. But Danny dreams of making soccer his life. The players Danny most admires are South Americans, such as Pele and Carlos Riga, who he feels have a special rhythm and flexibility. Wanting to add some of these qualities to his own game, Danny gets a brainstorm: he'll take mambo lessons, in the hope that dancing like a South American will help him play like a South American. To the surprise of himself and his friends, Danny turns out to be a pretty good Latin dancer and finds himself smitten with a pretty American student in his dance class, Lucy (Keri Russell). However, Lucy happens to have a boyfriend, who is a fierce competitor on one of Danny's rival teams. Executive producer Gabriel Byrne appears in a supporting role. ~ Mark Deming, Rovi

Jerry Lavelle
as Master of Ceremonies

Abbie Spallen
as Receptionist
View All

Critic Reviews for Mad About Mambo

Audience Reviews for Mad About Mambo

There are no featured audience reviews for Mad About Mambo at this time.