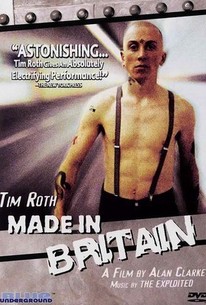 Made in Britain Ratings & Reviews Explanation

Director Alan Clarke's influential television drama Made in Britain marked the screen debut of actor Tim Roth. Roth plays Trevor, a skinhead with a swastika tattoo on his forehead who lashes out verbally and sometimes physically at everything that surrounds him. Cinematographer Chris Menges (who would go on to win Oscars for his work on The Killing Fields and The Mission), gets his camera right in Roth's snarling face, as the film tracks Trevor's progress through the British justice system. In the courtroom, charged with attacking a Pakistani man and vandalizing his store, Trevor displays absolutely no remorse as he matter-of-factly admits that he knew the man would have to be hospitalized for his injuries. Trevor's social worker, Harry (Eric Richard), recognizes Trevor's intelligence, but he's running out of ways to convince Trevor to straighten out his life. Harry takes him to a juvenile detention center for "assessment," after which he'll be sentenced. Trevor immediately dismisses Peter (Bill Stewart), the put-upon supervisor of the center, as a "wanker." He meets his black roommate, Errol (Terry Richards), whom he quickly convinces to come out with him on a car-stealing, glue-sniffing, job-center-vandalizing day trip. Brazenly returning to the detention center in a stolen car, Trevor eventually provokes Peter into locking him in a classroom, so a police superintendent (Geoffrey Hutchings) can harangue him about the hopeless path his life is taking. Trevor refuses to accept the center's (and society's) standards for "good behavior," raging that they all just want everyone to follow the rules and keep their mouths shut. The script was written by David Leland (Wish You Were Here) and the songs on the soundtrack are by the anarchist hardcore band the Exploited. ~ Josh Ralske, Rovi

Jirí Stanislav
as Man on Stairs #2

Critic Reviews for Made in Britain

There are no critic reviews yet for Made in Britain. Keep checking Rotten Tomatoes for updates!

Audience Reviews for Made in Britain

Made in Britain Quotes