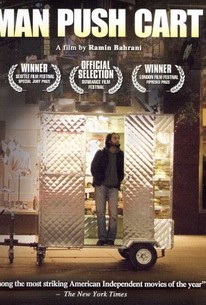 This compassionate portrait of a New York City street vendor is as beautiful as it is melancholy.

A former Pakistani rock star attempts to adjust to life in New York City while simultaneously making friends and selling coffee from a push cart on the streets of Manhattan in Iranian-American director Ramin Bahrani poignant, character-driven drama. By day Ahmad (Ahmad Razvi) tends to hurried Manhattan-ites by keeping their bellies full and ensuring that they are adequately caffeinated, and by night he supplements his income by selling bootleg porn DVDs. Though Ahmad hopes to one day raise enough money to purchase a place of his own and reunite with his estranged son, times are tough in the city and the hard-working immigrant soon strikes up a tentative friendship with fellow countryman Mohammed (Charles Daniel Sandoval); a generous but sometimes condescending soul who readily takes the fledgling New Yorker under his knowing wing while offering additional work decorating his apartment. Spanish immigrant Noemi (Leticia Dolera) works at a newsstand near Ahmad's cart, and also finds herself warming to the haunted former rock-star's timid ways. As Ahmad, Mohammed, and Noemi gradually begin to socialize together, a tragedy in Ahmad's past soon prompts the struggling New York newcomer to question the true nature of his current relationships. ~ Jason Buchanan, Rovi

Abdelrahma Abdelaziz
as Friend at Bar

Qamar Bukhari
as Guy In Karaoke

Asim Mujahid
as Guy In Karaoke

Mousa Kraish
as Guy In Karaoke

Ana Brzova
as Girl Outside Club

Cynthia Martin
as Girl In Limo

Sybil Prince
as Girl In Limo