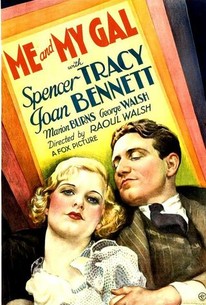 Me and My Gal

Me and My Gal Ratings & Reviews Explanation

Danny Dolan (Spencer Tracy) is a good-hearted, streetwise waterfront beat cop in New York City who gets promoted to detective when he saves the life of a drunk (Will Stanton) who falls into the river. He also strikes up an acquaintance with Helen Riley (Joan Bennett), a wisecracking waitress at a nearby diner, which leads to a potential romance. Each one's bravado and tough self-image, however, prevents them from admitting how they feel about each other. Also getting in the way of their romance are Detective Allen (Adrian Morris), who permitted wanted hood Duke Castenega (George Walsh -- the director's brother) to slip off of a boat and into the country while Danny was making his rescue; and Helen's dimwitted sister Kate (Marion Burns), who used to date Duke, but is now marrying dull, steady, loyal merchant seaman Eddie Collins (George Chandler). She can't quite push Duke out of her life, and when he breaks prison and turns up trying to hide out in Kate's home, she's foolish enough to hide him. It falls to Eddie's father (Henry B. Walthall), a paralyzed World War I veteran, to try and warn Danny and save his son's wife and their marriage.

Henry B. Walthall
as Sgt. Collins

Bert Hanlon
as Jake the Tailor

Will Stanton
as Drunken Fisherman

Roger Imhof
as Down and Outer

Eleanor Wesselhoeft
as Wife
View All

Critic Reviews for Me and My Gal

Audience Reviews for Me and My Gal

Me and My Gal Quotes