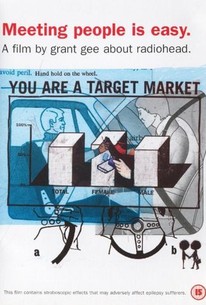 The British rock band Radiohead are an unusually introspective and downbeat group of musicians, which would make them unlikely candidates for international pop stardom. But against all odds, that's what happened to them in the wake of a hit single, "Creep," and press notices that have made them one of the most talked about English groups of the 1990s. In Meeting People Is Easy, director Grant Gee watches the band as they record their third album, the highly acclaimed OK Computer, then head out for an international tour, playing concerts and promoting the record in Europe, Japan, and the United States. Anyone expecting high-spirited hijinks in the manner of This Is Spinal Tap will be quickly disappointed (though anyone expecting high spirits from Radiohead has probably never heard their music). Meeting People Is Easy focuses on the downside of life on the road, as the band is booked into a long series of non-descript arenas, invited to perform on award shows where they clearly feel out of place, and repeatedly answer the same questions from an endless parade of journalists, with lead singer Thom Yorke often seeming to buckle under the strain. Meeting People Is Easy received a brief theatrical release in the United States prior to its bow on home video through the band's American record label, Capitol.