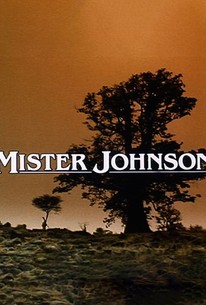 Director Bruce Beresford followed up his Academy Award-winning Driving Miss Daisy with another meditation on race, Mister Johnson. Set in West Africa in 1923, Johnson (Maynard Eziashi), the clerk of British administrator Harry Rudbeck (Pierce Brosnan), attempts everything within his power to ingratiate himself into white society. Johnson hatches a plan to juggle the books so that Rudbeck will have the capital necessary to achieve his ultimate dream of a "great northern road," but when his scheme is uncovered, he is fired. After finding another job with a shopkeeper named Gollop (Edward Woodward), he is again fired for his "creative" financing skills; however, Rudbeck hires him back to oversee the road construction project. When funds are cut off, Johnson convinces workers to do their jobs for free to ensure the project's completion. Once again, he is caught embezzling, and once again, he is let go; in a fit of desperation, he robs and kills Gollup. After confessing to the crime, he begs Rudbeck to kill him, sparing him the humiliation of public execution. ~ Jason Ankeny, Rovi

There are no featured audience reviews for Mister Johnson at this time.