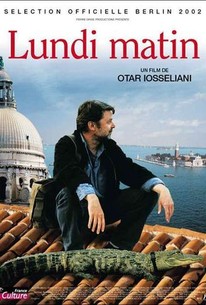 Vincent (Jacques Bidou, producer of Raoul Peck's Lumumba and several other films, making his acting debut) lives in a little French town, filled with eccentrics, and he follows the same routine, day in and day out. Up at five a.m. every morning, he takes the car to the bus to work, where he and his co-workers enjoy smoking a cigarette during the ten-second walk from the bus to the chemical plant gate. There the dreariness continues. He gets no satisfaction from his work, and none from his home life, where his wife (Anne Kravz-Tarnavsky) nags him, his older son, Nicolas (Dato Tarielashvili), ignores him and his younger son, Gaston (Adrien Paschod), gets into mischief. All Vincent wants to do is relax and paint, but he rarely gets the time. One day, instead of putting his cigarette out and going to work, he walks away from the plant and enjoys his smoke. He then goes to visit his father (Radslav Kinski), who encourages him to take a trip to Venice and visit an old friend of the family. In Venice, Vincent is robbed. He meets his father's old friend, Enzo di Martino (played by the writer-director of the film, Otar Iosseliani), a vainglorious fallen nobleman who goes to great lengths to impress his guest. Vincent also meets and befriends Carlo (Arrigo Mozzo), who turns out to lead a remarkably similar life. Iosseliani won the Silver Bear at the 2002 Berlin Film Festival for his direction of Monday Morning; the film was also shown at the 2002 New York Film Festival.

There are no featured audience reviews for Lundi matin (Monday Morning) at this time.