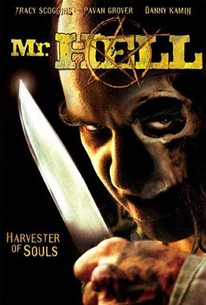 Years after succumbing to the corrosive effects of toxic industrial acid in a subterranean chase turned deadly, a brutal serial killer returns from the grave to spread mayhem and death in director Rob McKinnon's infernal frightener. As a young child, the trauma that Tyler experienced after discovering her father's lifeless body was unimaginable. His eyes removed by the crazed killer known as Mr. Hell, Dr. Karl Matthews had been working on a high-tech series of top-secret biological weapons when he was brutally slain by the rampaging psychopath. Though his young daughter would bravely give chase to the killer, the frenzied pursuit came to a bloody end when a load of deadly toxic acid instantly dissolved the madman. Fourteen years later, Tyler is all grown up and working at the very same lab where her father met his grisly fate. As the lab prepares to close its doors forever, a pair of incompetent waste workers bungles the removal of the toxic elements and inadvertently re-animates the vengeful Mr. Hell. Add to the chaos a group of mercenaries who are determined to make a tidy profit by breaking into the lab and stealing a vial of deadly bacterium for sale to the highest-bidding terrorist, and the stage is set for a blood-soaked night of horror where the doors are locked down and the screams can be heard for miles.

There are no critic reviews yet for Mr. Hell. Keep checking Rotten Tomatoes for updates!

There are no featured audience reviews for Mr. Hell at this time.