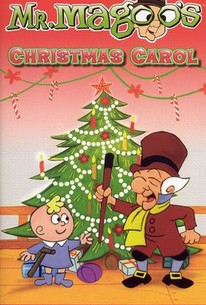 Having made a bundle on their 130-episode package of Mr. Magoo TV cartoons, the folks at UPA studios decided to star Magoo in a 60-minute musical version of Charles Dickens' A Christmas Carol. First telecast over the NBC network on December 18, 1962, Mr. Magoo's Christmas Carol deftly uses the device of depicting Magoo as a famous Broadway star, returning to the stage to essay the role of Ebeneezer Scrooge. This "framing" device has, unfortunately, been eliminated from currently available TV and video versions of this hour-long animated special. Still, Magoo has plenty of time to shine as Scrooge, a role ideally suited for the character's crotchety demeanor and comic nearsightedness. The five original songs by Jules Styne and Bob Merrill are wonderful-far more so than the disposable score of the 1970 live-action Christmas Carol musical adaptation Scrooge. The principal voices are provided by Jim Backus as Magoo, Jack Cassidy as Bob Cratchit, Royal Dano as Marley's Ghost, and Joan Gardner, Morey Amsterdam and Paul Frees. Mr. Magoo's Christmas Carol served as the pilot for the 1964 animated anthology series The Famous Adventures of Mr. Magoo, wherein Magoo essayed such literary roles as Friar Tuck, Gunga Din, and all seven of Snow White's dwarves.

Les Tremayne
as Ghost of Christmas Present
View All