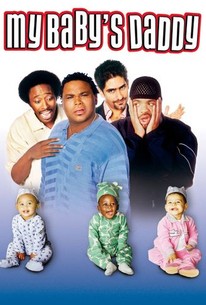 Full of poop jokes, broad racial stereotyping, and other tired gags, My Baby's Daddy makes the absolute least of a decent premise.

Three lazy pals find they're facing fatherhood simultaneously in this light-hearted comedy co-written by star Eddie Griffin. Lonnie (Griffin), G. (Anthony Anderson), and Dominick (Michael Imperioli) live stress-free lives with Lonnie's trash-talking Uncle Virgil (John Amos). But when all three young men's girlfriends get knocked up at the same time, they're forced to take a long, hard look at their lifestyles. For G., who works at the family grocery store of his girlfriend Xi Xi (Bai Ling), that means saying no to criminal temptation and staying on the straight and narrow; for Dominick, it means taking time out from his busy career as a record producer and coming to terms with surprise revelations from his baby's momma; and for Lonnie, it means recognizing ghetto-fabulous girlfriend Rolonda (Paula Jai Parker) as the gold-digger she is and finding a new lady love without sacrificing his individuality. Directed by Cheryl Dunye, whose previous features were low-budget indies, My Baby's Daddy also stars rapper Method Man as imposing ex-con No Good.

Randy Sklar
as Brotha Stylz No. 1

Jason Sklar
as Brotha Stylz No. 2

Method Man
as No Good

Young Dre The Truth
as Rapper

Tommy "Tiny" Lister
as Drive By

Quancetia Hamilton
as Woman Shopper No.1

Jude Coffey
as Cashier No.2

Critic Reviews for My Baby's Daddy

Audience Reviews for My Baby's Daddy