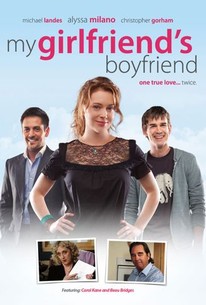 Jesse (Alyssa Milano, Charmed) is a sassy, intelligent woman who has yet to find "Mr. Right" -- until she bumps into Ethan (Christopher Gorham, Ugly Betty, Harper's Island), a writer pushed to the edge of despair after having another novel rejected by publishers. For Jesse, the encounter offers more than a chance to inspire the artist in Ethan again. It also opens a new, romantic chapter in her life... with one huge complication.Moments after meeting the perfect guy for her, Jesse meets Mr. Perfect -- Troy (Michael Landes, Possession), a confident and successful advertising executive who makes almost every moment elegant and romantic. Soon Jesse is in over her head and grappling with the ultimate romantic paradox: what does a girl do when she meets "Mr. Right"... after already meeting the right guy?Ultimately, what Jesse discovers about love reflects what the audience discovers about the story itself: Things are not always what they seem. My Girlfriend's Boyfriend is a classic love story turned upside down, a romantic comedy that blends a warm sincerity with fresh, stylized storytelling and some very big surprises. --© Official Site

Kelly Packard
as Suzy
View All

Critic Reviews for My Girlfriend's Boyfriend

Audience Reviews for My Girlfriend's Boyfriend