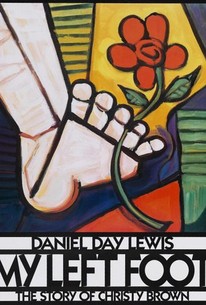 No doubt most will come to My Left Foot for Daniel Day-Lewis' performance, but the movie's refusal to go downbeat will keep it in viewer minds afterwards.

An alternative to the general run of "triumph over the odds" biopics, My Left Foot is the true story of Irish cerebral palsy victim Christy Brown. Paralyzed from birth, Brown (played by Hugh O'Conor as child and Daniel Day-Lewis as an adult) is written off as retarded and helpless. But Christy's indomitable mother (Brenda Fricker) never gives up on the boy. Using his left foot, the only part of his body not afflicted, Brown learns to write. He grows up to become a well-known author, painter, and fundraiser, and along the way falls in love with nurse Mary Carr (Ruth McCabe). There's no sugarcoating in My Left Foot: Brown, a heavy drinker, was by no means lovable. Day-Lewis and Fricker both won Academy Awards for their performances, and the film was nominated for Best Picture, Best Director, and Best Adapted Screenplay. Also notable are the late Ray McAnally in his next-to-last film role as Christy's father, and venerable Cyril Cusack as Lord Castlewelland. Director Jim Sheridan co-scripted with Shane Connaughton from Christy Brown's autobiography. ~ Hal Erickson, Rovi

Derry Power
as Customer in Bar

Jean Doyle
as Woman with Pram

News & Interviews for My Left Foot

Critic Reviews for My Left Foot

Audience Reviews for My Left Foot